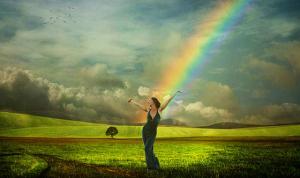 Recently I taught my last class at Colorado Free University. It's the end of an era, literally, the end of a decade of my life. I started teaching at CFU in early October 2006. It's time for me to step into a new phase of my life, following my bliss once again, moving to Los Angeles in order to pursue an MFA in screenwriting at UCLA's school of Theater, Film, and Television.

I'm excited about it. It's something I've wanted to do for a long time. Though sometimes I get a little scared and nervous about moving to L.A., but soon enough I get over it. The excitement wins out over the anxieties.

It actually surprises me when I look back at how long I've had this dream. The farthest back I can remember was sometime between 1993 and 1995, after I had graduated from the University of Denver, I went on for a Master's Degree in Economics, and then transferred into the Graduate School of International Studies. I dreamed of working in the Foreign Service.

Yet, there was always this small seed in me, the part of me that loved books and writing. She wanted to write. I went to California with a friend and met his sister who lived in Burbank and worked as a Second Assistant Director. She had a book titled How to Write Movie in 21 Days. For some reason I was powerfully drawn to the book and wanted to borrow it. After that, I began doing research on film schools, particularly in Southern California, where the film industry is located, but then my life went in another direction.

I became a mother and a paralegal, then I became self-employed. That was 20 years ago. Now that my daughter is grown and graduated from high school, she's off to Gunnison to attend college at Western State. I've decided it's time for me to fulfill that dream now.

I strongly believe in Following My Bliss, and in my practice as a life transformation coach and facilitator of Non-Violent Communication (compassionate communication), I encourage others to do the same... to live from an energy of Authenticity, Love, Passion, Trust, Abundance, to let your heart and work be in alignment with each other.

When I began my monthly blog on RMCCN.org called My Compassionate Journey, it was mostly an inward journey; now I'm moving into a phase that's more outward. My compassionate journey is becoming a literal journey out into the world.

The skills I have developed through my training in compassionate communication have helped me to improve my interpersonal communication, and also the way I communicate with myself. I believe that's why, over time, as individuals continue their studies, training, and practice in this language process developed by Marshall Rosenberg PhD, they naturally become more authentic, more in alignment, more integrated. The different parts of ourselves learn to communicate better with each other. We learn to listen to ourselves more deeply and empathically the same way we do with others.

When one feels heard empathically without judgement, it creates spaciousness and safety for the most vulnerable and authentic parts of oneself to emerge and be accepted. This is what leads to integration. Integration leads to integrity. The definition of "integrity" is "the state of being whole and undivided." I think it's easier to understand the meaning when we use the word to describe a building or a foundation. The integrity of a building determines how strong is it and how long it will last, especially under adverse conditions such as hurricanes, earthquakes, tornadoes, etc.

It's the same with human beings. Integrity comes from the harmonious integration of all the different parts that make up the self. It's easier to maintain equanimity and balance when one is at peace, rather than at war, with oneself.

Though some of us may have learned to function in childhood through dissociation, fragmentation, and compartmentalizing, we eventually reach a place in life where those coping mechanisms are no longer working. They're what I call "functional dysfunctional patterns." They've functioned well enough to get us where we are, but not well enough to take us any further in life."

If those patterns and mechanisms for coping are not addressed and healed (because they are usually born out of woundedness) the individual remains frozen at a certain point and cannot make progress or move ahead in life. The same kinds of patterns of addiction, escapism, abuse, dysfunctional relationships, stunted career growth, etc. will continue to repeat themselves endlessly year after year, decade after decade.

Non-violent communication is the only tool I have found to heal these old patterns, leading to integration, integrity, and authenticity. This is a much more empowered state from which a person can live a fulfilling and self-actualized life.