THE FOLLY OF LIFE 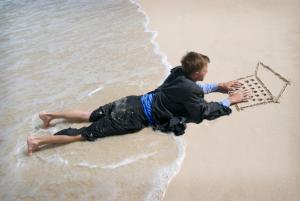 THE FOLLY OF LIFE

About 10 years ago, I began reading and studying the works of Carlos Castaneda, and the warrior teachings of don Juan Matus, a Yaqui sorcerer. He taught Castaneda that human life is all folly. It doesn’t matter what we do… because we all end up in the same place.

But for a warrior, a spiritual warrior, that folly is “controlled,” meaning that a warrior focuses on being fully present, taking responsibility, moving toward freedom and consciousness expansion. He said that once a person steps on the path, they are caught by Spirit and can never leave the path; the only question is how far they can go.

I was completely captivated by the teachings and longed to live as an “impeccable warrior,” but it wasn’t until I discovered Non-Violent Communication that I really had the tools to move forward on the path of enlightenment and consciousness expansion.

Though I have a deep regard for the Christ Spirit, I do not call myself a Christian. I was raised Catholic and have experienced first-hand the damaging effects of a moralistic judgment and the installation of guilt at a young age as a form of behavior control and domination.

Largely the flavor of moralistic judgment and guilt that were embedded in me at a young age had to do with money and wealth.

I learned that Jesus was poor. Jesus sacrificed. Jesus was good. Poor people are good. And I owe him a lot for taking away my sins.

The reverse side of the coin came along with it, which is: rich people are bad, like the camel trying to get through the eye of a needle, they will never enter the gates of Heaven.

Wanting to be a “good” person, I could never allow myself to be wealthy. I was afraid to ask to have my needs met, particularly for material support, compensation, and reciprocity because I would see myself as “greedy” and feel guilty. Maybe I thought that if I took “too many” resources, there wouldn’t be enough left over for others. I would give and give and give of myself, and then feel angry and resentful when there was little or no reciprocity.

Yet this moral construct was so powerful that, for me, it was reality. It was not to be questioned. Any time I even attempted to question it, I was so overcome with guilt, that I immediately stopped in my tracks. The guilt flooded me with a visceral experience of fear and nausea, screaming at me that I was going down the wrong path.

Yet the message in Non-Violent Communication told me that meeting my needs -- in the form of requests -- is my birthright. So I pushed through the fear and the nausea.

Over time I have found that meeting my needs fills me up in a way that gives me a generosity of spirit and compassion toward others. I’m more capable of being fully present with others because my needs are met. I am resting in the fullness of my needs being met and therefore it’s easy to meet others where they are.

I don’t feel compelled to give more than I’m capable of giving, nor do I fear asking for what I need because I’m now comfortable hearing, “No.”

When I hear a “no,” I simply return to the River of Willingness with my need and find another strategy for meeting that need.

Sitting here at a Starbucks in Malibu, California, gazing out the window at the blue sky and the waves lapping up on the beach, in the fullness of my needs being met, I can see that all life really is folly.

I could just as easily be living on a friend’s couch in the cold approaching winter, feeling depressed and hopeless, or sitting here near the beach. It’s all the same in the end because both eventually end up in the same place -- that place called Death.

But here I am, happy, and because I am happy, because I had the courage to meet my needs, without feeling guilty, I feel excitement about what I have to offer in this lifetime.

Since all paths lead in the same direction, I’ve decided I may as well walk a path with heart, a path of joy.