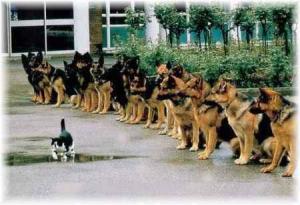 I am naturally a rebel at heart (I’m the cat in this picture).  Whenever I think something or someone is trying to control me, it triggers Little Miss Rebel.  She’s a pistol and has been known to throw things across the room when the alarm clock goes off.  In fact, this is largely why I became self-employed to begin with.  I needed power in my world.

There was much to be gained and learned from the experience of being self-employed; one of the biggest was coming face-to-face with the need for self-discipline.  Yet, it was continually a struggle until one day I began to understand one of my core beliefs about life.  I hadn’t realized it until a friend made a completely innocuous request and I was suddenly triggered, believing that it wasn’t really a request; rather, it was a demand.

As we discussed it further, I began to understand what was underlying the resistance – the deep belief within that this was a demand and that I had to say yes because this person had no concern for my needs.  Yet, I’d been in the NVC community with this person for four and a half years, so how could that be true?  Something about what was going on inside of me just didn’t jive with the teachings of NVC.

I shared what I was really feeling and needing, though I kept saying, “That doesn’t mean I won’t meet your request, I’m just sharing honestly what’s coming up for me.”  But as the conversation progressed, I thought, “Maybe as an experiment, just to practice honoring my feelings and needs, and to see what will happen, to see if this is really a request or a demand, it might be beneficial to say that I’d prefer not to meet the request at the moment because it’s late, I’m tired, and I was just getting ready to leave, but I can do so first thing in the morning.”

Everything ended well, and that’s when I realized that my deep belief that my needs wouldn’t be met caused me to project my fears onto the other person.

What was most astounding about that conversation was that it helped me to understand why I had been experiencing resistance my whole life!  I was immediately full of resistance, rebellion, and rage before I even took the time to explore the situation in more depth.  The child part of me who was never allowed to say no when I was small and defenseless was still screaming inside.

But I’m an adult now.  I have the power to say no.

What does all of this have to do with self-discipline?  Just that once I really assimilated the truth that I had the power to say no, the feelings of resistance, rebellion, and rage that used to get triggered completely dissolved.

I was suddenly capable of embracing self-discipline.  It became fun, like playing a game, like reading a novel about a heroine who has phenomenal self-discipline, and pretending to be like her.  I’m not talking about obedience.  There is a world of difference.  Self-discipline emerges out of the self and one’s personal values.  Obedience is submission to an external authority or force.

As I began to embrace and enjoy self-discipline because I was meeting my needs for power in my world, choice, autonomy, and productivity, it became a source of energy.  When my alarm clock went off at 5:30 in the morning, the first word that went through my mind was “discipline,” and it came with a feeling of desire.  I flung the blankets aside and jumped out of bed to start my day.

But, you know, I’m still that cat prancing past the German Shepherds.  Still a rebel at heart.