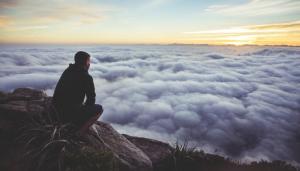 In April, I knew I was going to pass through a birth canal, metaphorically speaking. On the horizon was a major move from Florida to Colorado, helping my dad (who likes to hold onto things a bit longer than many might consider necessary) pack up his entire two-bedroom house, plus the garage, and haul everything across country. I did all of this while careening toward the final weeks of the spring semester in a full-time master's degree program.

We managed to get across Alabama without a hitch, but by the time we reached Louisiana, it was another story altogether. Knowing this was going to be a challenging time in my life, I equipped myself with downloadable audio books such as "The Untethered Soul" by Michael Singer, and listened to the book while driving. It was like having a calming friend alongside me, reminding me to stay present, to stay in a state of observation.

Within the first few hours on the road, the rope holding down a tarp that covered the objects piled into the back of my dad's pickup truck came loose.

I was driving close behind, watching the tarp on the back of my dad's truck flap up and snap in the wind, then a large rubber bin fell out and crashed into the highway, spilling its contents, stuff rolling out, cars swerving to avoid the debris. A suit bag lifted off the back of the truck, my stomach sailing with it, landing on the yellow center line, splitting open, clothes flying everywhere like ghosts freed from their graves. Several cars swerved to avoid hitting them, including my own.

This was the first of seven calamities that faced us on that trip. But I'd made a wise decision from the very start. Listening to "The Untethered Soul" kept me mindful of staying present and observing. While it might have been completely normal for my amygdala to shoot off and cause me to "go ballistic," instead I found myself just staying present, observing the plasma of reality pass by me, while thinking, "I wonder if I can do anything about this situation?" but by then -- driving at 75 miles per hour on the open highway -- we were long past being able to do anything about it. The worst had already happened.

Fortunately no harm was done to anyone or anything, except an old rubber bin and a bunch of clothes left over from the 1970s that my dad had not looked at or worn in decades. When we pulled over to re-tie the tarp, I was able to continue staying present and calm. In the end, I realized that the best thing I could "do" in that situation was not add to the chaos. I've no doubt that my calmness in the face of the seven calamities made it easier for us to endure the situation with much less stress and heartache.

In such times, I really comprehend what a gift something as simple as presence and observation can be.