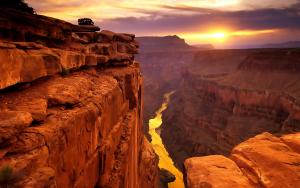 My B.A. degree is in political science and economics, with a double minor in history and international studies, which I chose because I have a deep abiding commitment to nonviolence in the world and thought I would work in government, particularly diplomacy. Instead I became a facilitator of nonviolent communication, working for the Rocky Mountain Compassionate Communication Network, and I am also working for a nonprofit organization in Beverly Hills that promotes the well-being of disenfranchised groups and individuals.

I think the results of this election have energized me in a way I wouldn't have been if Clinton had won, and since I don't yet know a lot of people out here in California, I've been engaging on Facebook more than I normally would.

What I've been longing for is an open dialogue and discussion, a desire to be really open to listening to the views and perspectives of everyone, but particularly those of people who voted for Trump so as to create some connection, to heal the rift, because the rift is the wound where violence grows like an infection. I absolutely refuse to blame Trump, or blame his constituents for ANYTHING. The judging, shaming, blaming, and punishing of others is the petri dish of violence. (On both sides! We don't get a free pass here.)

Having said all that, I admit, I tend to prefer hearing those questioning views from people on my side of the fence. It's a little easier. I admit, hearing it from a Trump voter -- "Here's how you got it wrong, Democrats" -- might feel a bit condescending, but eventually I want to work with that too.

Anyway, to start, here is a commentary from Miki Kashtan, a leader in nonviolent communication, that I found interesting and thought-provoking, perhaps a place to begin opening our minds to this new reality. If we don't at some point begin opening ourselves to hear what Trump supporters have to say, the rift will only increase. And that's the wound where violence, fear, and hate will breed, so if you really want "peace, liberty, and justice for all," then I'm advocating for listening, listening, listening. As Gandhi said, "Be the change you want to see in the world." If you believe in peace, then become it. Living peace isn't about saying "What's wrong with those people?" It's about saying, "Hey, what's up with y'all that you voted Trump? I'm really curious. I want to hear what you're feeling. I want to hear what needs you're long to meet." And then listen.